I’m not gonna lie, I had some doubts before agreeing to meet him. We chatted intermittently for a few weeks and I continued watching his “works” (for research purposes, duh). Until one day, on a fine afternoon, I decided to give it a go. To quote the youngsters, #yolo. I parked my car on the street and anxiously walked to his apartment not knowing what to expect. To my surprise, he’s actually even hotter in real life than he was in his videos. I figuratively gave myself a pat on the back and thought, “dayummm, this is gonna be good“. 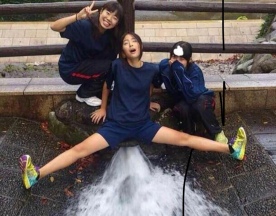 It didn’t take long for us to get naked in his bed. I made sure that I was wearing the sexiest pair of underwear that I owned, and from his apparent lustful stare, I could tell that I made an excellent choice. I just thought I need to step up my game since I was dealing with a guy whose job required him to be in a pair of skimpy underwear all the time. As he was triumphantly laying on his back while my lips were busy going up and down his dick, he aggressively held my hair, passionately looked me in the eyes, and said:

I guess for me it was a humbling experience that humanizes not just him, but also other sex workers in my eyes. When you watch actors on your TV screen, you often forget that they are regular humans just like us. Although our occupation might differ, all of us still get irritated when you’re asked if you wanna pay an extra charge for guac at Chipotle. Like seriously? We all know and it’s not even a question. Just. give. me. my. fucking. guacamole.

P.S. I’m not gonna disclose his information or provide the link to his films for privacy reasons.

P.P.S. his bathroom was really dirty and it made me think of him “preparing” for his shoots. Boner killer.

View all posts by Sanura Ubutt

This site uses Akismet to reduce spam. Learn how your comment data is processed.

Because talking about mental health is always sexy. 👩🏻‍⚕️🗣
Apologies for the long wait. Life (and covid) happened, and I, unfortunately, didn't have much time to write. But I poured my heart and soul on this one, and I hope you love it as much as I do. ❤️🙏🏼
Now, for something completely different, I wrote some of my honest thoughts on the questionable behavior of Indonesian gays on Grindr. 🍆📸
Is it coincidence how every time @taylorswift releases new music, I start writing more depressing shit? 🎤🧣
I'm back! And this time, I'm bringing you a chapter about not one, not two, but seven guys! Mawma was busy! 😈💋
What makes sex awful for you? 😩🧟‍♂️ New chapter is up! Link is in my bio #squirttale
Loading Comments...
%d bloggers like this: